The remote mountain town of Mindat is a district of the Chin state in the west of Myanmar, situated at 4,860 feet above the sea level  and about 5 to 7 hours drive from Bagan.

The remote tribal Mindat area, was restricted by the Burmese government until three years ago and now is open for tourist.

Mindat town known for its untouched traditional culture, a place to meet the fascinating face tattooed  women who made this area known to the world.

A very beautiful sunrise view from the room

The Chin people in Southern Chin Hills used to have the custom of tattooing on the face of the women.

There are many stories about the origin of Chin tattoos, one of that is  these tribes first began to ink their faces as a way of disfiguring their beauty, they had no way but to destroy their beauty make themselves unattractive and, in doing so, avoid being kidnapped or chosen as concubines by the Burmese kings. A second legend states that they were tattooed distinctively to allow for identification with their tribe of origin in the event that they were kidnapped by another tribe. Another reason is they believed a facial tattoo makes them beautiful, more attractive and would receive attention from most of the young men. Although nobody could authenticate the validity of this story. 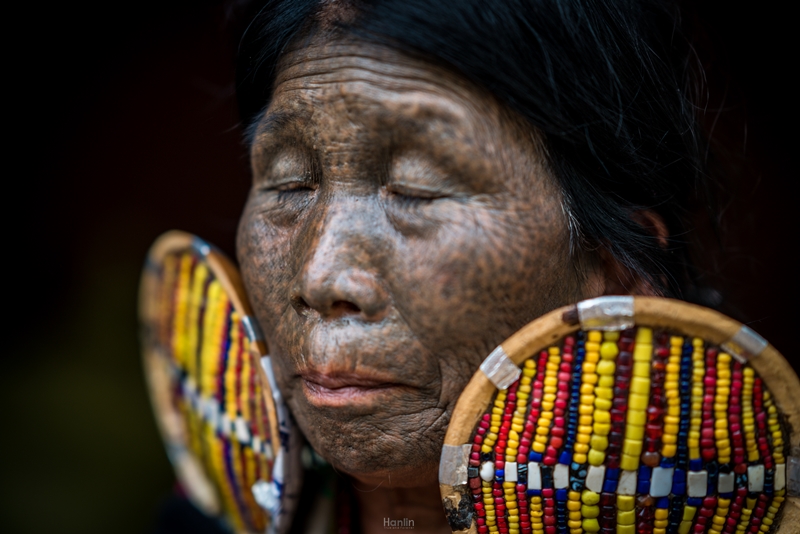 The tattooing was extremely painful, especially to the tender eyelid area. The process normally takes one day but this can be extended to two days. The recovery process may take at least two weeks. The facial tattoos are made from heating the bark of green pine trees and capturing the smoke in a mud pot. The smoke is then mixed with a kind of bean leafs and the resulting liquid is injected under the skin, using the thorn of a cane plant.

The practice of facial tattoo is no longer permitted by the Burmese authorities. The practice has been outlawed since 1960s, but some still practiced it until around 1980s. Hence this part of the Chin culture, will be gone soon.

The last of the remaining tribeswomen with these magnificent tattoos drawn on their face. The process of the facial tattooing is quite painful and dangerous. Some even died of infection. They are beautiful, proud and brave women.

The Chin women usually wears traditional drum and shaped earrings. She loved her earring so much and tell us that nowadays nobody make this kind of earring anymore.

She started playing the nose flute when she was 15 years old. She also tells us, that to play a flute using the nose is not simple, and it needs a lot of energy and stamina to make it sound perfect. She spoke very softly in Chin dialect and her daughter helped to repeat it again to our Chin local guide, and the Chin local guide translated it to our driver in Burmese language, and our driver translated it to English for us. But language is not a barrier, even if we didnt understand each other, she was still very hospitable towards us, and entertained us, smiling beautifully and holding our hand.

She also showed us the water pipe she used to smoke with decades ago.

Around Mindat, live 3 tribes of Chin called Munn, Mkang and Dai tribes, each has different tattoo design. Mainly, there are two kinds of facial tattoo styles

– Munn’s tattoo style involves straight lines from forehead to neck with circles between the straight lines and small dots on the forehead and chin. The color is mainly black and lighter.

– The Dai, Mkang have the same tattoo styles except for slight differences in the density and lightness of the colors. They are all have tattoo on their faces but not on their necks; several squares are drawn on the face and these are densely filled with dots. Dai women favor dark-blue and green-blue colors.

The Munn tribe have distinctive letter “B” patterns on their faces and an animist tree pattern on their foreheads.

Tribe lady in Chin state is best known of the intricate ink details covering their entire face. This tradition started since generations ago when several tribes in the Chin province of Myanmar began to tattoo the face of each and every single young woman.

Chin facial tattoo is practiced only by female. Soon after the girl enter the age of puberty, between 12 and 14  is the best time before the facial skin mature and hard or painful for tattooing.

In olden days smoking is seen as a status symbol, and thus if affordable, many will end up smoking simply because it is viewed as a sign of wealth. 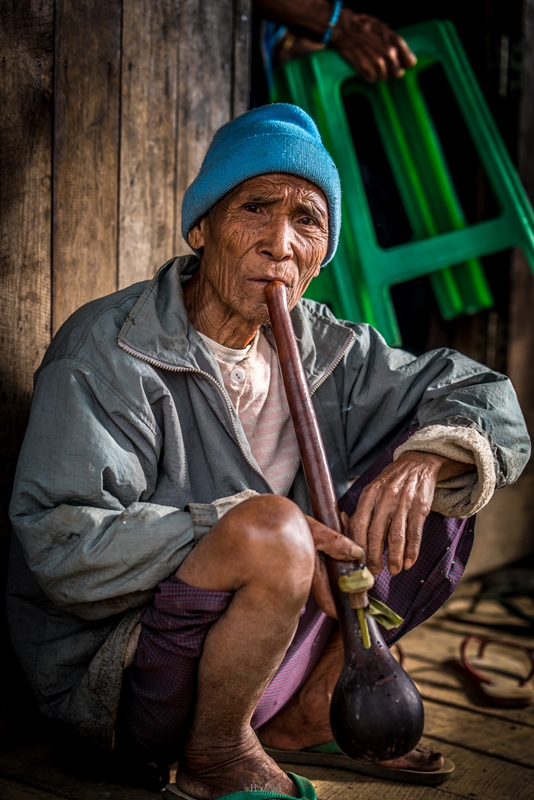 In the Chin Hills, the traditional means of “smoking” is through the use of nicotine juice called Thibur. Thibur is primarily used by the elderly, who hold the juice in their mouths and eventually spit it out.

The elderly carry thibur in containers made from small gourds. To create thibur, nicotine is smoked in a water pipe which produces thibur drippings. 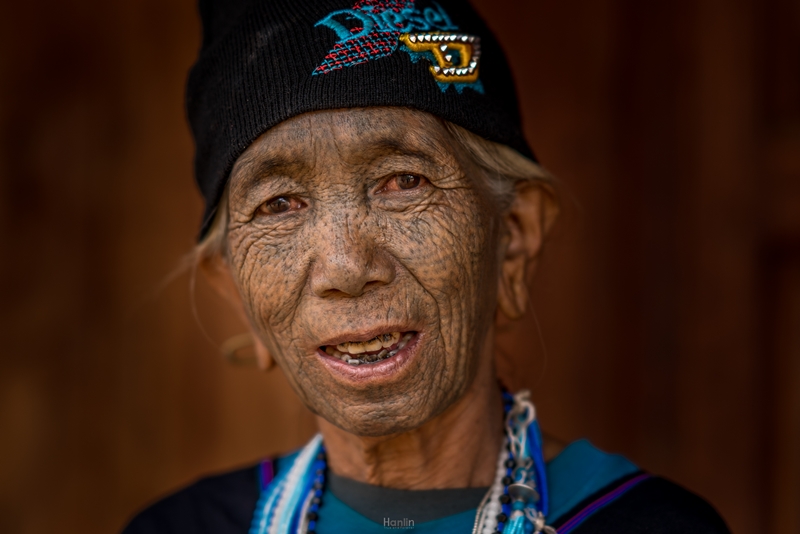 Each area of Chin state has a distinct tattoo pattern so it is usually possible to determine where a woman comes from by the look of the tattoo on her face. 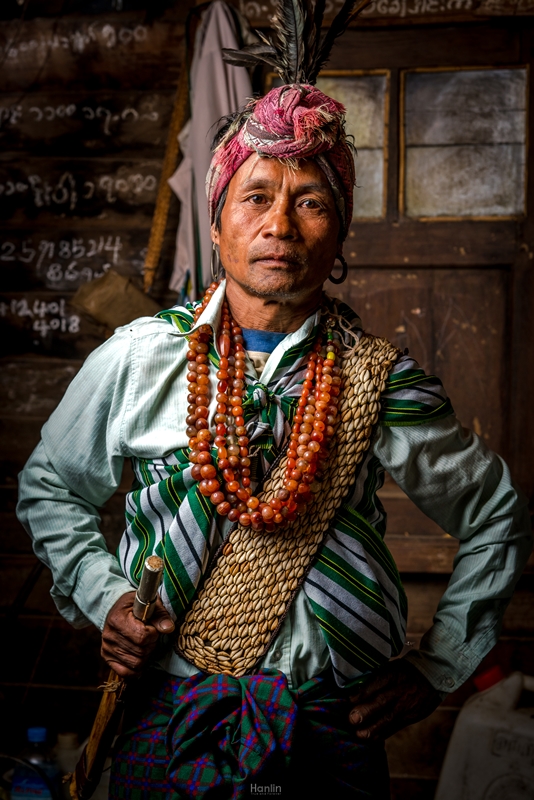 Along Mindat town, there is skull of animal hanging in front of the houses. Mithun (wild ox) is the indication of the wealth of the family, Mithun also a value benchmark like money or gold. Mithun usually for ritual sacrifice and meat consumption.

Every household in the village is decorated with the skull of goat, bull and wild animals they secured from the forest. By decorated their houses with these skull there is a sense of pride because it shows their power, wealth and prestige. 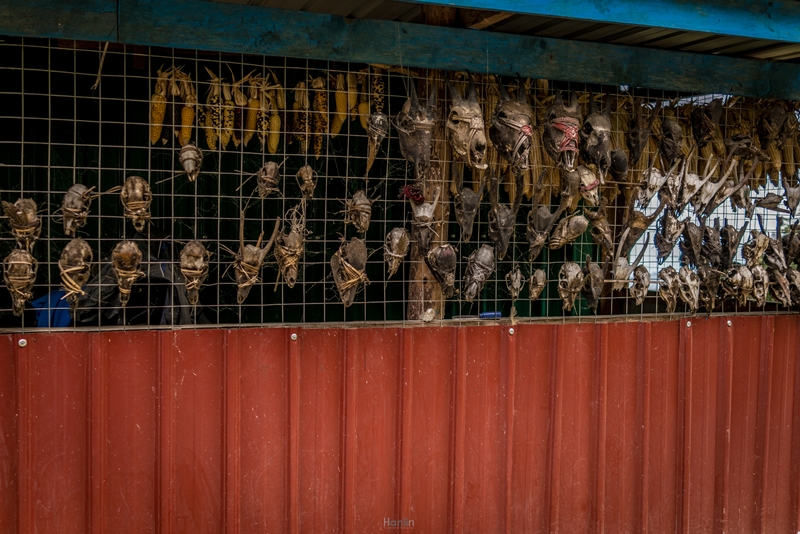 Currently, the majority of the Chins are Christians, few practice Buddhism, and a handful remains animists. According to Wikipedia, “Animism encompasses the belief that there is no separation between the spiritual and physical (or material) world, and souls or spirits exist, not only in humans, but also in some other animals, plants, rocks, geographic features such as mountains or rivers, or other entities of the natural environment, including thunder, wind, and shadows.” 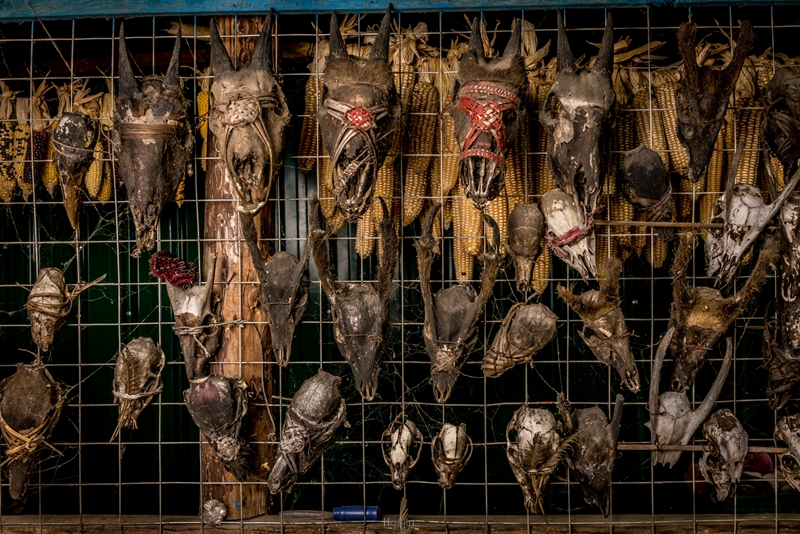 The Chin are 98% Christian. The first Protestant missionaries to Burma were Ann and Adoniram Judson in 1813, and they worked among the Karen people, who received Christ. They then began to spread the word to their close relatives, the Chin. 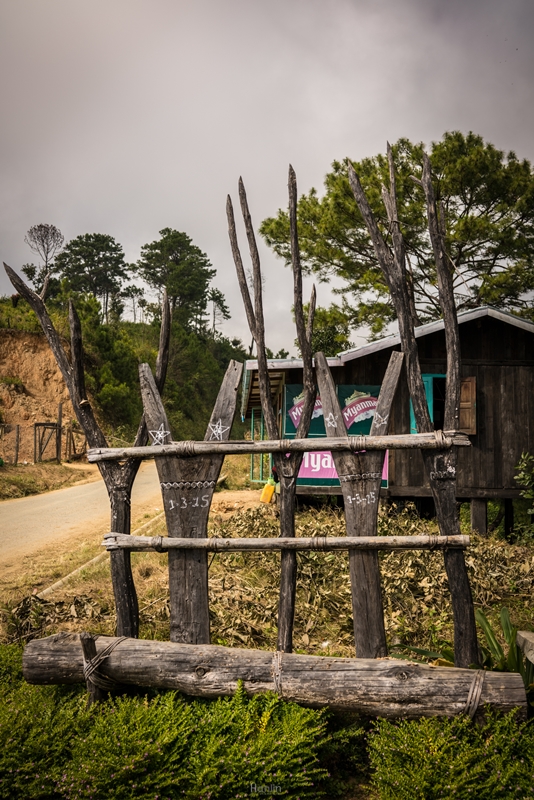 In Mindat, there are  Y-shaped wooden poles. They are easily found in the road in the forest and mountain area villages and used for the ceremonies as a place to put a cow. Large wood spike with different carving for different meanings to show the record how many animals they had sacrificed.

Meet this lady carrying woods while we are on the way to visit Chin tattooed face lady in the village. They’re carrying using a basket also known as Chin head basket. 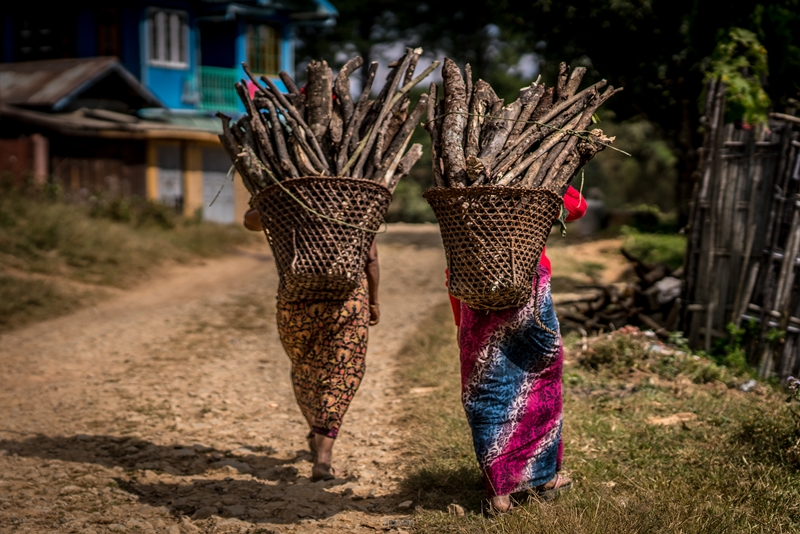 For Chin people, they have been carrying a big load since they were young and there is no problem for them to carry a heavy head basket over their head. For us, this is not an easy task to even start with.

The cemetery itself looks like a squarish table with legs, they are formed using a stones.

Chin house usually has only one room, all activities take place on the floor where food is prepared and eaten.

On a night time mats are rolled out  for sleeping and then rolled up or stacked away during the day. Because they only have one room and the floor is the center of home life, it is impolite to enter Chin’s house while wearing shoes.

We met two beautiful lady with their kids while they making rice flour traditionally in front of their house. 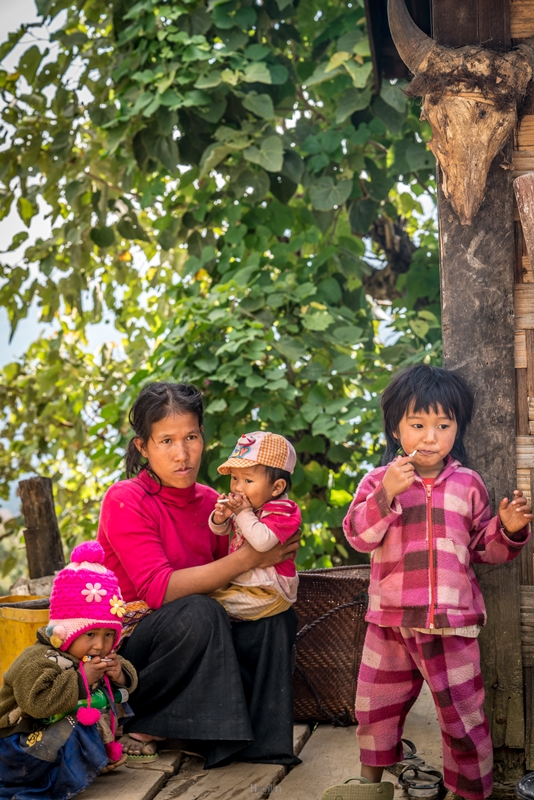 In olden times in Chin village household, usually they have more than 3 kids, sometimes they even have up to 10 kids.

She’s so happy when we distribute some medicine and snack for her. As our local guide said they are more than happy to received medicine rather than money, because of the remote location and limited access to hospital.

Chin culture is a male-dominated culture where women are for having babies and looking after the house chores, and some women also do plantation work. 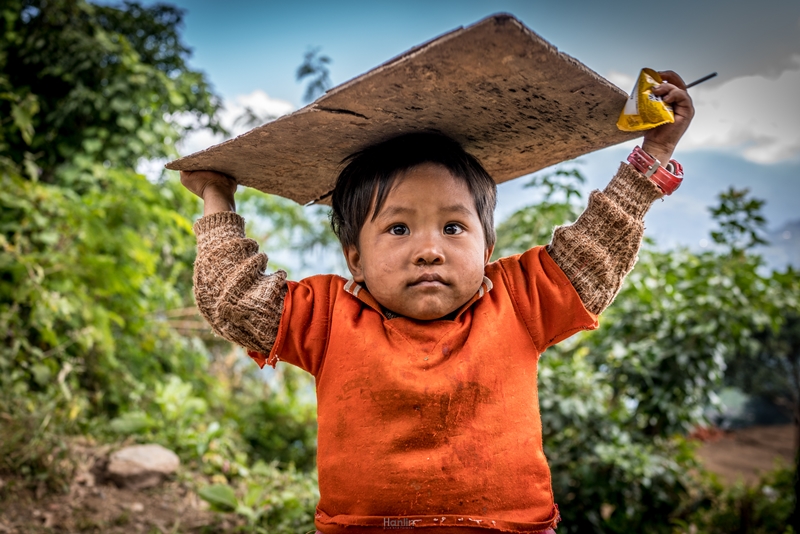 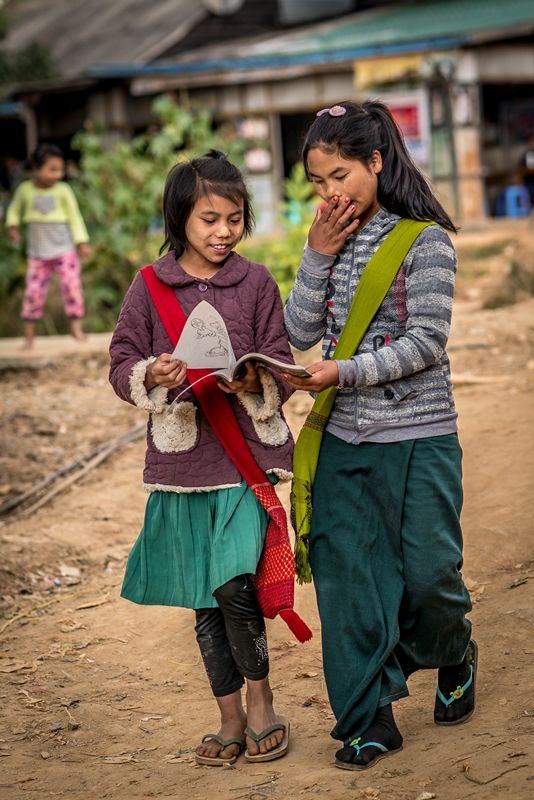 A happy face he had as he received some medicine while we had a short walk around the village to distribute medicine. 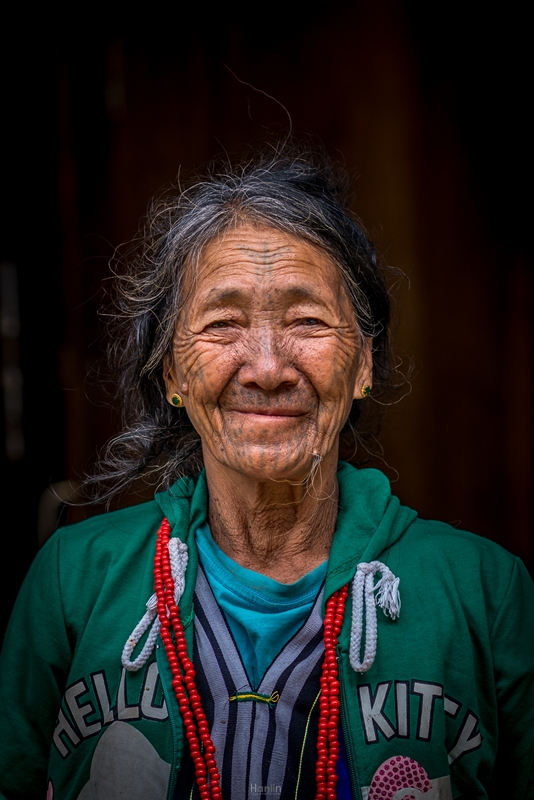 Chin woman with a faded tattoo on her face over the years. Her smile will melt your heart. We met her while we do a small walk on the village together with our driver and local guide to distribute medicine.